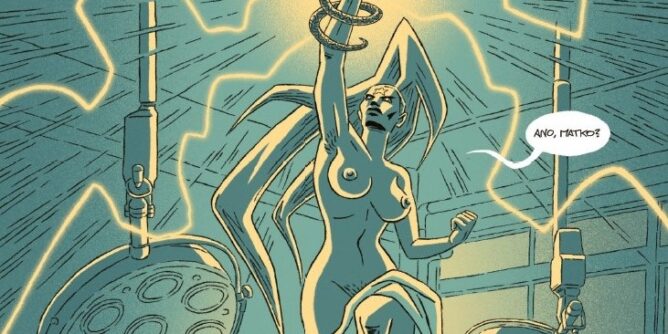 The 18th issue of the respected comics magazine “Aargh!“ was published in early April this year.  Its topic is Norwegian comics, which it seeks to introduce to Czech readers through a historical retrospective by Kristian Hellesund, and short comics pieces by creators such as Jason  and Kristopher Schau.

Besides the Norwegian focus, we also look at the global story of Octobriana  and the Czech student comics competition CS.KOMIKS. It also wouldn’t be a real “Aargh!”  without a mix of well-known Czech authors such as Ticho 762, Václav Šlajch  and Pavel Čech accompanied by numerous young rising stars and their works.

As Tomáš Prokůpek, one of the “fathers” of Aargh!, noted in the foreword, the comics history of Norway might even serve as an example of where Czech comics could have been right now if communism hadn’t played such a huge part in Czechoslovak history.  Kristan Hellesund’s article explains why that is so.

Even though Czech comics history is quite rich and definitely adventurous – as the 1088 pages of the book “History of Czechoslovak comics in 20th century (2014)” shows, Hellesund explains how the role of comic magazines, along with support from the state, and hand in hand with the public acceptance of the comic medium, was a game changer that we lacked in Czechoslovakia in those days.

Works by Jason, Karstein Volle, Kristopher Schau, Øystein Runde and Ida Neverdahl are presented as a nice mix of different writer/artists and topics covered in Norwegian comics. From the nearly existential, but very simple premise of Jason’s pieces  and the stressful social construct commentary by Volle, to the more emotional and expressive art of Neverdahl.

One thing missing is a wider context of the presented works. This is particularly obvious in Margarin, which is quite distinctive. However the reader experiences only a small part of the story. For deeper understanding of the context, it would be great to link Hellesund’s article to the artist’s in order to explain the bigger picture.

Myths are still the key selling point
In addition to the history and a sampling of current Norwegian artists, “Aaargh!” also offers  works by Czech comics creators with a Nordic vibe. In these works, mythology visibly plays the strongest role. However, while Ondová’s distinctive flat art amplifies the gloomy atmosphere of a very minimalist storyline, Ticho 762 goes for an interesting comic monologue with only a final nod to Nordic stereotypes.

It would be a shame not to mention the introduction by Tomáš Kučeřovský (the second Aargh! founder) and his “game-like” report from “Raptus”, the comics festival of Bergen. He successfully kept the link between computer games and actual life simple and fun, which can be rather tricky with such a narrative technique.

Alongside the Norwegian-Czech comics selection and Prokůpek’s note about the possibility of perceiving Norwegian comics as a “no-communism era” parallel, profiles of Jaroslav Velinský and Josef Gertli Danglár draw a picture of how life could be for a comics enthusiast back in the time when the police could break into your home because you were a member of secret comics club. Especially Danglár’s story is very nicely shaped, and numerous quotes from the artist keep the text light and funny even though the reality described in the story is less amusing.

Young and wild comics show fresh perspectives
The issue’s exploration of the magazine’s imaginary adulthood is concluded by the youngest generation of artists associated with regular Czech and Slovak competition CS.KOMIKS. The mostly introductory article is accompanied by the most important contributions – the works of the 2017 winners. Kateřina Karolik deservedly won first place in the Czech part of the competition with her nicely shaped color palette as well as a nearly fable-like plot, in stark contrast to the Slovak winner, the 17 years old Bohuslav Argaláš and his wild visit to his grandma, full of clones, deadly parasites and light humor. The very diverse mosaic is rounded off with an autobiographical story based on experiences with cornea irritation, where Jana Vobořilová presents a somewhat passive, but very poetic piece questioning the current way of living and the priorities we have. Although all those works could use a bit more robust structure, it’s amazing to see how these young artists try to play with paneling and discover how the comics format can be utilized.

Borderline of being comics artist and fan
The richness of the comics medium as well as the specifics of the Czech comics industry  are also a topic of both the interviews in the magazine, this time with Anna Křivánková – translator of Japanese manga – and Karel Osoha, who currently works on the trilogy “King of Šumava”. While the interview with  Křivánková represents a missed opportunity for an in-depth discussion, covering only Japan in general and few inspirational tips for your manga reading list, the second interview took a different turn and uses Osoha’s analytical approach in terms of artwork. The interview covers specifics of various projects with the leitmotif in development of personal style, the use of comics narrative, and cooperation with scriptwriter.

“Aargh!” ages well, and there is very significant body of work in each published issue. Once again, the reader has a chance to go through works by established artists as well as comics newbies. The 18th book was very well balanced without any slips. If anything, a broader context and more focus on the main topic would provide the readers with a better perspective, and give them an even greater desire to sink into Norwegian culture. However, just being able to successfully include 25 comic stories and six quite significant journalistic pieces deserves a toast. After all, Aargh! is finally an adult!

It’s been 19 years since the first issue of comic magazine “Aargh!” appeared in Czech bookshelves. During those years, it has grown from 68 pages to nearly 200 and has built a reputation as a much anticipated annual event. The magazine presents both Czech and foreign comic creators, interviews with big comics personalities and profiles of partly forgotten creators who ought to be remembered. The editors of and “Aargh!“ are Czech comics experts Tomáš Prokůpek and Tomáš Kučeřovský.