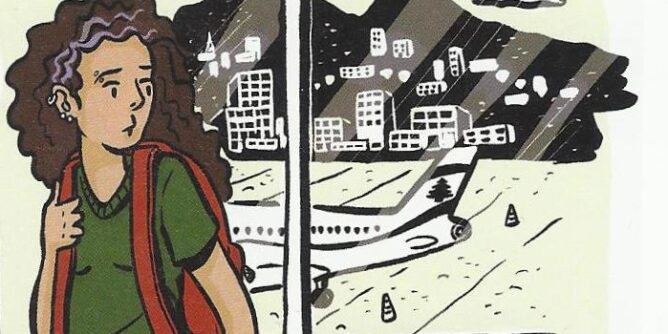 I was always a storyteller, ever since I learned how to talk, says Jeanine El-Khawand, winner of the Strand comic strip contest. We have been talking to her about the comic strips “The Good Innvandrer” (immigrant) and her academical approach to comics.

Your comic strip is in Norwegian and English. How does this reflect your daily communication while staying in Norway?

I’ve heard that people who speak multiple languages have different personalities for each language they use. I think there is some truth to this. My partner and I usually use English when speaking to each other, and I always tell him that he is missing out because he will never know how funny I am in Arabic.

I have to admit that I have been quite lazy about learning Norwegian in the year that I’ve been here. But it’s not entirely my fault: people find it easier to switch to English than to endure my slow and agonizing process of forming a sentence in Norwegian. I think learning takes some patience on both sides.

In TGI, when I first write the strip, I write it all in English. When I’m done, I sit down with my partner to translate some of it to Norwegian. A lot of times, jokes don’t translate that well, so we discuss the best way to write them. Then I show the strips to my roommates and hope to get a laugh. If they laugh, then the strip is done and ready. If they don’t, then it’s back to the drawing board!

In Bergen you’ve been involved in Skeiv Verden Vest. What made you decide to involve yourself in the LGBT cause? And do you think this will be reflected in the comic?

Newcomers usually struggle to find a community and support system. This is why I consider myself very lucky to have found Skeiv Verden Vest early on when I moved to Bergen. Skeiv Verden Vest is an organization that helps people from minority backgrounds navigate the Nowegian system, make friends, and manage the challenges of being queer with a migrant background in Norway.

I was also lucky to have met and become part of the Arabisk FilmFest in Bergen. Working as the festival director has pushed me to get acquainted with the city and its people a lot faster than I would have otherwise.

I have always been involved in activist and artistic work. Since the main character and the stories are heavily inspired by my experiences and beliefs, then I think this will reflect in the coming comic strips.

You’re a vegan, and one of the strips you have gotten published so far, already demonstrates this. What made you decide to become a vegan, and how do you think this will influence your comic strip?

I made a decision to become vegan last year. Before that, I had been vegetarian for around five years. I have to admit, it was a slow and somewhat difficult transition. I decided to become vegan out of moral and ethical concerns, and out of compassion and responsibility towards both human and nonhuman others. I also made the transition out of a growing concern for the environment.

This is already reflected in my comic strip, and will keep being a recurrent theme because the main character shares my views on this (she has to! I created her!). But I think that the comic strip will show that it is not easy, and even though the character tries her best, she is human and flawed.

Frode Øverli (as jury member of the comic strip contest) described your main character as “pretty nice”, but is hoping she could become a little rougher. Do you think she needs to be more edgy and “woke”?

I am actually glad that she is perceived as “pretty nice”. She does try to be a good person despite everything. This is the whole point. We live in a world where it’s difficult to do the right thing. but she still tries her best. In that context, “pretty nice” is the new “edgy”. It is important to produce diverse narratives made by artists with diverse experiences and points of view.

This will lead to the representation and visibility of usually invisible topics, and to raising awareness. This is why I created these comics, to tell stories that reflect the experiences I face as an Arab coming to Norway, because I wanted to contribute to the diversity of stories told in comics form, and to diversity of representation.

This reflects in my comics without trying to feed audiences the political aspect with a spoon. Rather, I rely on the feminist saying “the personal is political” where the character’s existence, and the fact that she is taking up space (literally and metaphorically), is political in itself. The pressure to be a “good immigrant”, being “randomly checked” at an airport, or having a therapist belittle her experience are examples of power imbalances that my character has to face all the time.

When did you first come up with the idea for TGI?

I guess the idea has been brewing in my mind ever since I came to Norway. I have always used comics as a way of thinking and dealing with the world. And I think this is not different. I had been reflecting all year about my experiences coming here, but it wasn’t until I read the announcement for the competition that I started putting them into concrete little comic strips. That was, I believe, last September and I applied to the competition in October.

What kind of audience reaction have you gotten for TGI so far? Are you seeing any patterns in the way people are reacting to the comic?

I have been getting a few messages from people on Facebook telling me that they relate to the comics. I saw someone post one of the comics on their timeline saying “this is so me!”. As an artist and storyteller, you put your work out there and you hope that it resonates with people, so it means a lot to me. This makes me excited to see how wider audiences will receive the comic once it is printed in the newspapers. Fingers crossed!

What kind of comics did you grow up with, and what artists/creators inspired you to make comics yourself?

As a young child, I was fascinated by the comics my older brother was reading, mostly superhero comics, then later Franco-Belgian comics. I was always drawn to cartoons, and as a child I actually wanted to become an animator. I grew up watching anime, and I still do. So I was also reading Japanese manga like Rumiko Takahashi, Inio Asano, Kengo Hanazawa, etc. I am also a big fan of graphic novels like “Marbles: Mania, Depression, Michelangelo and Me” by Ellen Forney, “The Gigantic Beard That Was Evil” by Stephen Collins, and “Are You My Mother” by Alison Bechdel. I would read anything by Alison Bechdel really!

I was always a storyteller, ever since I learned how to talk. And ever since I picked up a pen, I’ve wanted to draw. I guess it was natural to put these two things together.

You are the co-founder Research By Comics. an initiative that brings artists and researchers together to turn complex research papers into comics in order to make them more accessible for the wider public. What more can you tell us about this initiative?

Research by Comics is an initiative that I co-founded with my friend who is an artist, an illustrator and a PhD candidate in Gender and Sexuality Studies.

Research is often inaccessible to the public, especially in its complex language. This is why it risks getting stuck in an academic bubble. Research by Comics was created to bring researchers and visual artists together to explore and develop tools for translating academic discourse on gender and sexuality to a broader audience through the language of comics. This is done in the form of workshops, where gender and sexuality researchers and artists collaborate on the creation of a comic in the Arabic language.

We have already held multiple workshops in the past two years, but we have not been able to hold any in the recent year because of the economic crisis, revolution, and subsequent explosion in Beirut.

You are writing a university thesis on comics as a tool for therapy. What is your study, and what can you tell us about the results of your thesis research so far?

In my thesis, I am looking into the potential of comics/sequential storytelling in trauma therapy. A new interest in comics was sparked in the 90s when critics began to publish research about comics as a deeper more meaningful way of telling stories. Since then, artists/authors/researchers have been looking into comics for wider uses, like comics journalism, comics in education and research dissemination, etc. This is what the comic artist and researcher Scott McCloud called the “reinvention of comics”, and the use of comics as a potential medium for social awareness and social change.

Comics’ use of both text and images, as well as their ability to be used by people with different skill levels, make it a great tool for storytelling as self-expression. We can say that comics have already been serving as tools for self-expression, and even therapy, for its creators and their readers for many years. Many artists who have made autobiographical comics dealing with traumatic events have described the process as “working through” the thoughts and emotions, and have reported that the production has brought them a sense of closure.

Comics can restore narrative when individual narratives are shattered. Among other things, in creating comics, artist-authors have complete control over their narrative. Also, the process of making them is that of telling and retelling of the narrative as one goes through the drawing, inking, and coloring phases. Revisiting the narrative can help process it and make it less anxiety inducing.

However, even though many artist-writers have shown the wide range of potential of comics as a way of processing the world, emotions, and achieving closure and wellbeing, their full potential in therapy, stress reduction and trauma narrative is largely unexplored, possibly because comics continue to be dismissed as childish and not taken seriously as a medium.

Will you be producing TGI comic strips regularly in the semester while you’re working on your thesis?

Maybe it’s a bit too early to get into this, but what would be your ultimate dream project as a comics creator?

With everything happening, I really haven’t had the time to think ahead into the future! I guess that after I finish my thesis and final project, I would like to give comics workshops and teach participants the tools to tell their own stories through comics. I think everyone has a story to tell, and everyone can make comics. It’s just a matter of putting them together. At the same time, I would like to be working on a graphic novel. Some stories are brewing in my head and in my sketchbook.

This interview has previously been posted in Norwegian