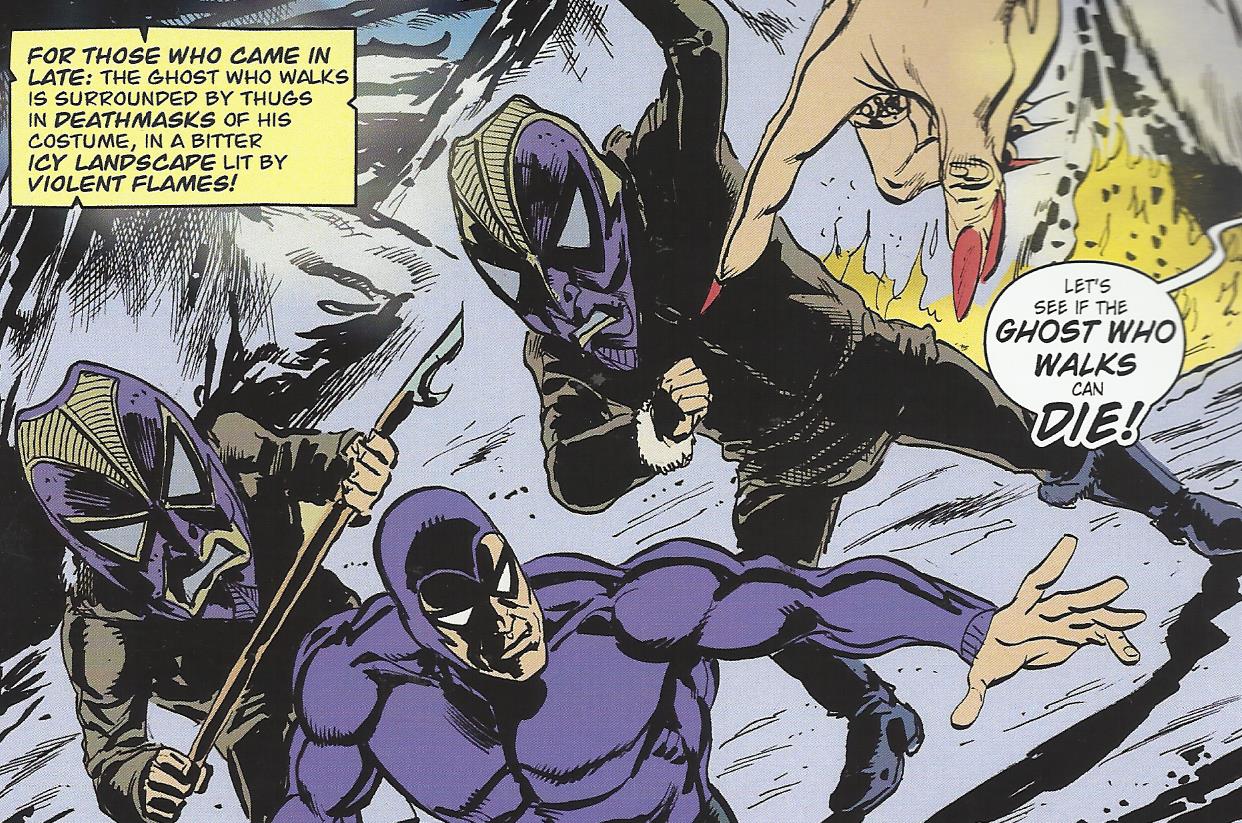 On Wednesday, fans were gathered in BarBarista in Bergen, Norway, to honor to The Phantom in a wake of sorts, but also to celebrate something new.

The Phantom was created by American writer Lee Falk (born Leon Harrison Gross) i 1936. At this time, he had already created another adventure comic strip, Mandrake The Magician, in 1934. These two comic strips were to become his life’s work, and he continued to write them both until his death i 1999.

In the strip, The Phantom was 21st in a line of crime-fighters which began in 1536, when the father of British sailor Christopher Walker was killed during a pirate attack. Swearing an oath on the skull of his father’s murderer to fight evil, Christopher began a legacy of the Phantom which would pass from father to son. Nicknames for the Phantom include «The Ghost Who Walks» and «The Man Who Cannot Die».

The Phantom is regarded as one of the first superheroes, although this is debated by his fans. The Phantom has no superpowers and relies on his strength, intelligence and reputation as a fierce immortal warrior to defeat his foes. He originally lived in the jungle of Bengal, India, but this was later changed to the fictional nation of Bangalla in Africa.

The Phantom became an instant success in large parts of the world, and made its Norwegian newspapers debut in 1939. It ran continually until the United States joined the war, at which point the comic was censored by the German occupation forces in Norway. In response to this, people began smuggling The Phantom comics pages into the country until the end of the war.

Despite the undeniable success of The Phantom in Norway, it was not until 1964 that the comic got its own regular, periodical magazine in Norway (an attempt was made for a few years in the fifties). This magazine contained both American comic strips, stories made especially for the comic book format and other comic titles besides the title characters’.

The Phantom’s comic book became an institution in Norway, and it peaked in the eighties, when the comic book was published fortnightly and each issue sold around 80 000 on average. However, in the nineties and 00’s, comics sales were gradually declining, and the publishers were forced to reduce the publishing frequency from fortnightly to monthly. It helped for a few good years, but in November 2018 came the announcement that many fans had been dreading: The Norwegian Phantom comic book would be cancelled due to low profits.

Pretentious as it may sound, it really was the end of an era for comic books in Norway. On Wednesday, fans were gathered in BarBarista in Bergen, Norway, to pay honor to the cancelled comic book in a wake of sorts. The evening’s main guest was Kjell Steen, long-time member of The Phantom magazine’s editorial staff in Norway, and officially nicknamed «The Boss». He is probably Norway’s foremost expert on all things Phantom, and had come to share his detailed knowledge of thecomic’s history as well as Norwegian comic book history in general.

However, this wake was not only to reminisce about the way things were, but also to celebrate a new comic. Irish comics publisher Lightning Strike recently began publishing a new Phantom comic book titled “The Phantom Strikes”, and Welsh comic book pro Mike Collins were one of the writer/artists being asked to make a story for the book. Having visited Norway many times, and even having a long-running collaboration with Bergen-based author Gunnar Staalesen and BarBarista manager Arild Wærness, he was allowed to set the story in Bergen. Another Norwegian friend, Knut Robert Knutsen, also helped with the story. All three were supposed to be present at the wake, but due to health reasons, Wærness was unfortunately indisposed.

In «Masks of the Phantom», which is the name of story, the titular hero is assisted by a local detective by the name the name of Gunnar Wulff. This alludes to the aforementioned Gunnar Staaelsen and his detective hero Varg Veum (“Varg” being an old Norwegian word for “wolf”) – a character that Collins has been working on several times, illustrating a series of graphic novels for Staalesen. But if he did use the name “Varg Veum” then it would’ve been perfectly okay with me as the copyright holder, Gunnar Staalesen assured Collins and the audience at the wake, and then went on to tell them he was honored by the gesture.