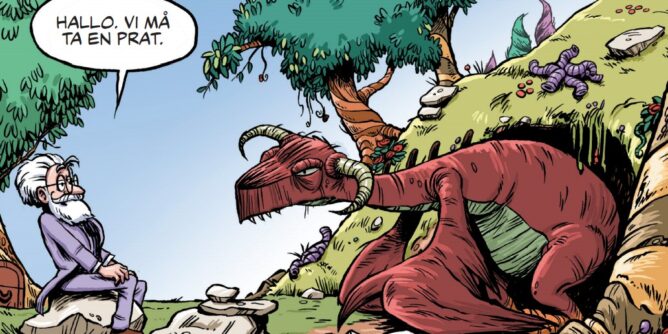 Rob Harrell’s graphic novel “Monster on the hill” made its debut in Norwegian this May. At the time of its American release, this cartoonist was mostly doing comic strips. Since then, he’s expanded his repertoire to the point where he feels more like a writer who can draw.

-“Monster” is sort of a thinly veiled self-help story, Harrell says. -I’d been in a bit of a depression at the time, and wanted to try a new project where I could stretch out creatively and challenge myself. The idea of a depressed monster who’d lost his way was just something that came about from some things in his sketchbook. He hoped that doing the book would pull both himself and the book’s main monster, Rayburn out of a slump – and it worked!

The book is set in Victorian age England, inspired by a series of books he had been reading that are set there -It’s just a time and place that I’ve always been drawn to, he says, and one day I was thinking about how Godzilla movies always show him attacking modern day Japan. He loved the idea big monsters attacking in different times and settings.

A different story
The book also inspired an upcoming animated feature film “Rumble”, but don’t expect to find it too familiar. For one thing, it revolves around monster wrestling.  Rob admits that his involvement has been pretty minimal, and that the film has been slowly changing course away from his book, for years and years. -It’s been an unusual experience, he remarks. -I always knew they’d make the story larger, but I didn’t expect it to stray so far from the source. And I NEVER saw the wrestling aspect coming! That said, I’ve seen the film, and they’ve done some really fun things. It’s a cool movie – just don’t expect to see a lot of my story and characters on the screen.

Leaving the circus
As a comics artist, Rob is best known for his comic strips Big Top – about a young boy growing up at a circus – from 2002 to 2007, and Adam@Home – about a work-from-home dad – from 2009 to currently.

-I’d love to still be doing Big Top. I miss those characters. The strip did okay, he recalls, but it never took off, so there were a lot of discussions that led to my decision to move on. He’d had a run in with cancer and treatments, and had medical bills piling up. So he took a video job and started trying to come up with ‘the next thing’. But he still daydreams about bringing it back in some form.

Adam@Home was created in 1984 by another American cartoonist, Brian Basset (it changed to its current name in 1995, several years before Rob took it over, suggesting that Basset was ahead of the times).

-It took a while for me to feel that sense of ownership, Rob admits. – But as the years have gone by, I’ve become more and more comfortable. Big Top was a little weird, I guess, so it took me a bit to figure out how to work that same weirdness into a family strip. But I’m having more fun with it now than ever.

Looking at Rob’s comic strips and “Monster”, you don’t get the impression that he’s a very politically oriented writer/cartoonist Nevertheless, Doonesbury is his all-time favorite comic strip, and he made political comic strips in high school. He’s considered doing political comics since, but concludes:

-Over the years I’ve learned to play to my strengths and how I naturally write. I think I could take a stab at being political, but it would probably be like fitting a square peg into a round hole. I tend more towards goofy world-building. And lately, politics have been so nuts that I’m not sure I want to think about them that much!

In recent years, Rob has been expanding his repertoire to hybrid books, chapter books with cartoons, inspired by Jeff Kinney. He saw what Kinney did with the Diary of a Wimpy Kid books, and it just looked like real fun. He wanted to try and do the same format, telling himself, ‘Hey, I know how to write funny and draw funny – I should take a swing at this!”.

His first creation in the hybrid format was Life of Zarf. Starring a young troll boy, it allowed Rob to build a fairy tale world pretty much from the ground up, loving the liberty it gave him as a storyteller: – It was just a blast. I thought seven-foot weasels would be fun, so I put seven-foot weasels in there! I thought they should have cell phones, so in my world they get dragons and texting coexisting.

Then, after writing three Zarf books, it suddenly felt right to make “Wink”. It’s a book loosely based on his own cancer experience, so suddenly the cartoons were there to offset the seriousness of the story, which was something new. He considers it the most personal book he’s done, and am thrilled with how it worked out.

For the Life of Zarf books, he made around 4000 illustrations, for “Wink” he made 80. It seems Rob’s creative work will always include cartooning. But something interesting has happened over the last few books, he feels: -I went from thinking of myself as a cartoonist who can kind of write to a writer who can kind of draw. So, I can see a time when I might find a story that just works better in straight prose than with the art.

-But that said, I love the combination! I feel like the art brings things to life in a totally different way. I’m working on these Batpig graphic novels right now, and honestly the coloring is one of my favorite parts, because you get to watch the world sort of wake up one page at a time!

Monster on the Hill is out in Norwegian now, But If Rob could choose one other of his work, comic, prose book, or something in-between, that he could have gotten translated and published in Norway, what would it be?

-Probably “Wink”, he replies. -Like I said, it’s by far my most personal story. It’s about a 12 year old going through treatments and your usual school problems, but his take on it all is really unique. He starts taking guitar lessons from his radiation tech and gets into punk music – which matches his mood.

-It’s fun, but I actually think there are some great lessons in there about empathy. Along with some really fun, funny stuff about being a kid. And he draws a character named Batpig – sort of his alter ego.

That said, I have to say that all of these projects feel like my kids and I love them all in different ways. “Monster on the Hill” is the one that came along and helped me out when I need it the most.